Can we use design to make insects tasty? 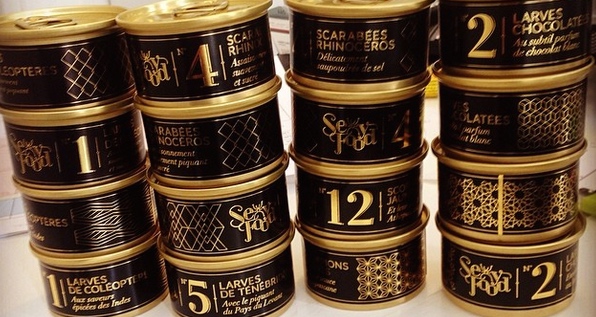 An interesting article popped up on Fast Company today about a startup looking to sell bugs as high-end snacks.

“The idea was to give a mysterious feeling,” says Steven van Boxtel from Atelier Design, which led the package design.

Sexy Food isn’t trying to appeal to people who like eating insects, instead they want to create an experience for those who want to try something new.

“That’s why we hid almost everything about the insects – they’re more eating a concept than they’re eating insects,” said Van Boxtel.

Insects have always been eaten by people around the world and today, 2 billion people eat insects as part of their diet.

But we in the west are hardly fans and unless you have an extremely adventurous palate – or your name is Bear Grylls – it’s unlikely that insects would be appealing.

This causes problems as our eating habits are not sustainable and contribute quite a lot to climate change. Raising and feeding thousands of bugs is much easier than thousands of cattle and requires far less space, so should the design world be concentrating their efforts on creating appealing branding, packaging and experiences for edible insects?

Sexy Food isn’t the only one trying to change our eating habits: A group of design students previously came up with Ento Box, choosing to hide the fact you are eating insects by redesigning the food itself. There are more examples but it is still a fairly niche topic and requires far greater traction to get anywhere.

If we can achieve that traction and use design thinking to create a new ethos around edible insects it would do us a lot of good, especially since the world’s population will rocket to 9 billion in 2050 and we will need to produce twice as much food.

It’s important to remember that we already use icky things like squid ink for colouring, gone off milk for cheese and pork blood for black pudding so we reckon insects could feasibly be the next step.

But what is the best way of turning creepy crawly into tasty treat? That remains to be seen.